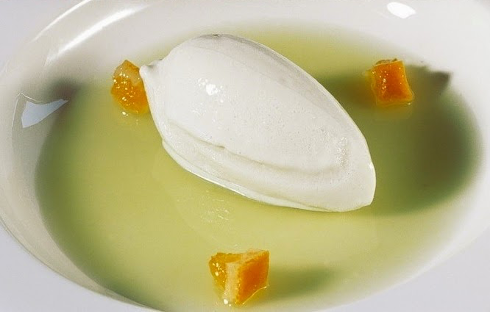 For four centuries, France had the supremacy over haute cuisine. French cooks' recipes were passed around, and future cooks considered their cookbooks the 'bible'. But in 2003 everything changed. Ferrán Adriá was on the cover of the Sunday edition of the New York Times under the headline 'Nueva Nouvelle Cuisine' and after 400 years, the spotlight turned to Spain.

Agar is part of this history. In the 1980s, leading figures from the culinary world, such as Juan Mari Arzak, Martín Berasategui or Ferrán Adrià, began to develop a new type of cuisine that sought to develop a comprehensive sensory experience and revolutionize the techniques. Traditional dishes were reinvented and deconstructed, several techniques and flavors from the East, Africa, Japan were incorporated... new textures, such as foam or spherification, were applied; and elements never before seen in the culinary world, such as liquid nitrogen, agar-agar or xanthan gum, were introduced.

Agar-agar was first introduced into the Spanish haute cuisine history in 1998 and, as often happens, by chance. Ferrán Adriá and his team went out to eat at a Japanese restaurant in Barcelona and ordered a soup containing gelatinous elements made from agar-agar, which did not melt in the heat. Thus, began the story of one of El Bulli's most famous cooking resources: hot gelatin. This represented something that at first seemed impossible, since gelatin has the property of becoming a liquid when hot and solidifying when cold.

Albert Adriá and  Oriol Castro, interested in this revelation,  tried crushing some agar-agar filaments and discovered that it could withstand temperatures of up to 85 °C, which made the elaboration of hot gelatin possible. In July 1998, a dish with hot gelatin was served for the first time in history:  Roquefort sorbet with hot apple gelatin.

But Ferrán Adriá's relationship with agar-agar didn't end there. El Bulli's team began to explore the possibilities cold gelatin offered so as to reinvent it. They could now create gelatin sheets with agar-agar, and so they developed a new type of 'pasta' for their dishes, noodles or ravioli with unprecedented flavors.

After this, agar-agar became one of the basic elements of any Michelin star kitchen.